Getting Back to Business: How the US Workforce is Coping with In-Person Work 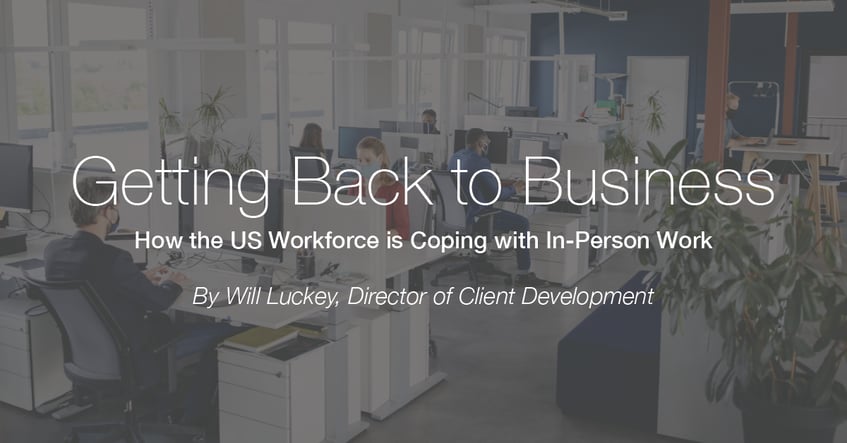 Starting in the 17th century, when the British Royal Navy was short on sailors, it would use “Impressment” to forcibly conscript able-bodied men. In practice, this meant sending “press gangs” into the pubs to grab anyone who looked like they could serve and drag them to the docks. Before they could sober up, they were off to a far corner of the world to serve the royal crown. Although perhaps they didn’t have to pay their bar tabs…fair trade, if you ask me.

This may sound like an appealing option to many corporate employers trying to coax their remote workforces back into the office as the US moves towards a full reopening. Unfortunately, that is no longer feasible in the age of Glassdoor reviews. However, it’s worthwhile for employers and employees alike to understand the current sentiments around returning to in-person work. To explore that question, InnovateMR conducted a study with 1,300 of our panelists between April 26th and 30th to see how they felt about returning to the office, and the sources of corresponding anxiety. We asked respondents who were anticipating a return to full time in-person work to pick which sentiment best described them; “entirely relieved”, “entirely anxious,” or somewhere in between.

Among those who have not yet returned to the office but are expecting to at some point, 73% expressed at least some level of anxiety around returning. 27% noted they were “entirely relieved”, 25% “entirely anxious” and 48% expressed a mixture of both. Of that 48%, 16% were more relieved than anxious, and 8% more anxious than relieved. 24% were equally relieved and nervous. This suggests a workforce full of mixed emotions. While a large chunk looking forward to some normalcy, many are still grappling with the uncertainty the last 14 months have brought.

One of the most notable demographic trends was by gender – 31% of women reported being “entirely anxious” about returning to in-person work compared to only 16% of men. Alternatively, 34% of men noted they were “entirely relieved” about the return to the office, compared to just 24% of women.

When split by self-reported political affiliation, Democrats did tend to show more apprehension around returning to the office than Republicans, although perhaps not as much as the common media narrative would suggest. An almost equal number of Democrats and Republicans were entirely anxious (21%). Even looking at those somewhat anxious but slightly relieved, that includes 30% of Democrats and 28% of Republicans. A higher number of Republicans felt entirely relieved (37% to 26%), but Democrats were much more likely to hedge their relief with a little bit of anxiety (22% to 9%). An almost equal proportion of each group felt either entirely relieved or mostly relieved with a little anxiety (47% of Democrats and 46% of Republicans). While the media narrative tends to suggest that Democrats are all still sheltering in their bunkers while Republicans are brazenly ripping off their masks, the data suggests that both groups have somewhat similar levels of relief and anxiety around a return to in-office work.

Interestingly, 14% indicated concerns over current physical appearance as a main source of anxiety for heading back to the office. Additionally, 13% expressed fear that their in-person social skills have declined due to quarantining during the pandemic. These sentiments were much more notable among younger workers, with 21% of workers aged 25-34 showing concerns about their physical appearance, compared to just 6% of those 35-44. 22% of those aged 25-34 noted a decline in in-person social skills, compared to just 10% of workers aged 35-44. Across all ages, men were more likely to have anxiety around diminished social skills (18%) compared to women (11%).

Preference for digital/remote work was also a prevalent source of anxiety around returning across all ages and genders. Overall, 24% indicated they were anxious to return as they had grown accustomed to isolation, and 16% noted that they now preferred digital/remote work. While these groups are still in the minority, it could be worth noting for employers as they think about making their employees feel comfortable heading back.

The data also shows that 21% of remote employees planning to head back to in-person work were “not sure” why they were feeling anxiety around returning. This was felt evenly across age, gender, and political affiliation. The reasons for this are obviously numerous and hard to dissect, but generally suggest that a substantial part of the population still feels the collective stress and trauma from COVID-19. Despite vaccinations and rapidly declining caseloads, the return to “normalcy” will not be an immediate transition; it will take time for workers to feel once again comfortable with in-person interactions. Meanwhile, there are millions of Americans that did not get the option of remote work. 34% of survey participants indicated that their job was fully on-site throughout COVID-19. Instead of Zoom fatigue and cabin fever, it was either continue to work in person amidst the raging virus or face unemployment. We cannot understate that those who are just now returning to the office are extremely fortunate.

Although throughout 2021, there have been signs that the worst is behind us. US infection rates have plummeted since their peak in January, and increased vaccination rates provide sound reason for optimism. While the trauma of COVID-19 is still very real, the actual risk of transmission is much lower than it was throughout most of 2020. That is not to say that the anxieties around returning to in person work are not valid. Fears of catching COVID-19 or spreading it to loved ones should absolutely be met with empathy by employers and fellow employees alike.

We all have a part to play to ensure that returning to the office is a gradual and positive transition for everyone. So while my employer is (probably) not planning to use impressment to throw me back onto the high seas of 21st century business travel, I am still very much looking forward to shaking hands with clients again this summer.

Will Luckey is a Director of Client Development here at InnovateMR, working closely with agencies and brands to ensure faster research answers, access to top survey participants, and high quality insights his clients can trust.

InnovateMR is a fiercely independent sampling company that delivers Faster Answers™ from business and consumer audiences. As industry pioneers, InnovateMR connects organizations with market research audiences around the world to support informed, data-driven strategies, and identify growth opportunities. InnovateMR has built its reputation on a relentless pursuit of customer delight. Stop working with vendors, and start working with a partner dedicated to your success.