Even if you’re not a football fan, you know what’s coming soon… the SuperBowl! We went to our proprietary panel at PointClub and asked them to predict who would win. And why!

It’s almost a 50/50 split, so no clear frontrunners here, but their reasons for their choices sure are interesting. Read through, then be sure to comment and tell us what YOU think.


Why will the Kansas City Chiefs win?

“Andy Reid is an outstanding coach. The Chiefs’ quarterback Patrick Mahomes is young, energetic… he makes the games he plays exciting. The Chiefs’ wide receivers are fast and have good hands. The Chiefs’ defense is the best it has been in their last 2 games.”

“[The Chiefs are] explosive once they get warmed up.”

“I love watching Patrick Mahomes play. His ability to connect his passes to other players is unbelievable. He is amazing to watch.”

“… for several years I said the only reason the Chiefs haven’t made it to the SuperBowl was because they didn’t have a good quarterback. That problem has been solved.”

“Mahomes is an excellent team motivator and a better quarterback than even Tom Brady. KC deserves a victory.”

“I feel like Kansas City has a drive to prove they are more than a one season team.”

Why will the San Francisco 49ers win?

“… San Francisco wants to restart their franchise’s domination of the West Coast over the East Coast in the NFL.”

“Coach Shanahan’s play calling befuddle defenses. The 49ers defense is playing at top form and should shut the Chiefs down.”

“I feel they have been the Cinderella team this season. Their team chemistry will seal the deal.”

“The San Francisco 49ers offense and defense will be too much for the Kansas City Chiefs to handle.”

“The 49ers are the best balanced team I’ve seen since Jimmie Johnson’s Dallas Cowboys. They have a great offensive line that provides both great coverage for the passing and running game. Their defense is made of real players that are incredibly cohesive.”

“They eliminated the Vikings and the Packers. No easy feat.”

“They will use their strong running game to exploit Kansas City’s weak run defense and set up playing action for Garoppolo.”

Ready to gather your own predictions? Request a demo of the Innovate Insights Platform today! 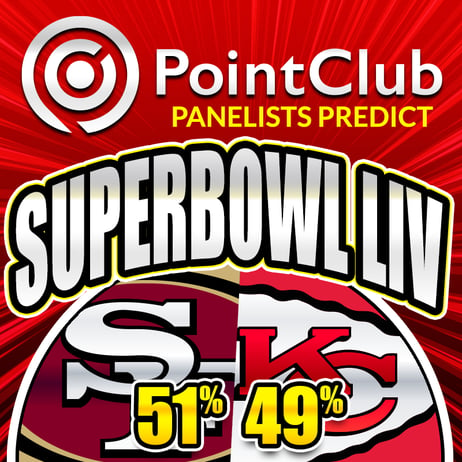