Living the American Dream through a Bicultural Lens: Celebration of Hispanic Heritage Month 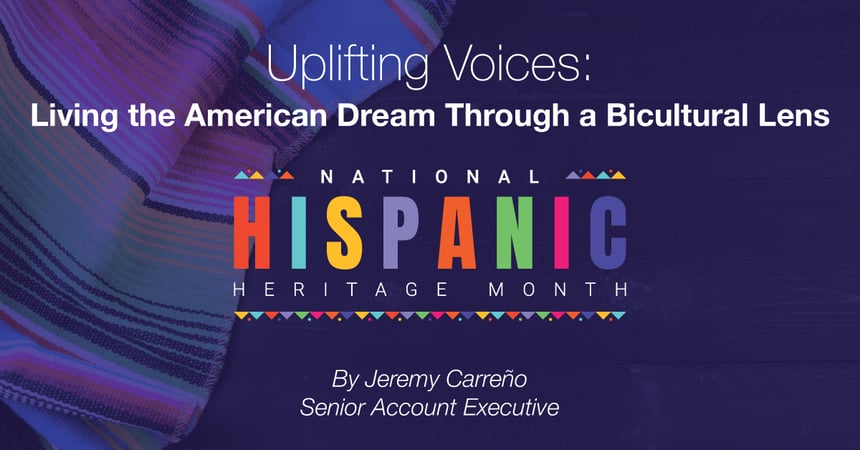 I still remember waking up on Saturday mornings, house smelling like eggs, coffee, and Chili Verde. I remember my dad wailing at the TV using every bad word in Spanish possible, in the hopes that his favorite soccer team, Chivas of Guadalajara, would listen up and win for once. It never made a difference in the outcome of the game, he would argue, but it made a difference in how I saw myself.

Both of my parents immigrated from Mexico in the late 70’s, found each other in Los Angeles, and began to live out the “American Dream”. They had my brother, then five years later, me. We moved from a 1-bedroom apartment in some not-so-savory areas of Hollywood, then moved to a 2-bedroom apartment in The Valley (San Fernando Valley), and finally bought a house in the mid-90s. Mind you, they did this all while my dad was a food runner and my mom was a housekeeper. They were the prototypical Mexican family living on wages that barely supported them, let alone two children – but they made it work, and found a way to give us a better life.

My brother and I were the first in our family to go to college. My dad stopped his education after 1st grade, and my mom after 4th grade, so they could provide for their families. As you can imagine, just getting to middle school was already a huge victory. But I didn’t stop there. I finished my undergrad at UC Santa Cruz with a double major in Politics and History. My brother hit it out of the park and attended UC Berkeley for his undergrad and Madison for his J.D. We were in fact living the American Dream, but the thing is, as first-generation Mexican Americans, we never actually fit in with the cultural norm.

My mom named us both very American names, influenced by the names of the white children she would take care of when she cleaned her clients’ houses. She settled on Jaeson and Jeremy because they sounded, well, white. Her intent was motherly and loving: give them acculturated names and they’ll fit in even better – it’ll be easier for them. Right? To a certain extent, it did help, but it also fueled our cultural dichotomy. White on the outside, fueled by Spanish bad words and menudo on the inside. Nirvana or Vicente Fernandez? Fútbol or Football?

I grew up speaking Spanish with a slight American accent, just enough to make me shy away from using it around “true” Mexicans. “What’s with the accent?”, they’d say, notably coining me güero or gringo. And the thing is, I didn’t even have to speak to get their attention. My fair complexion never gave anyone a doubt that I was anything but white.

Growing up I wondered, where do I fit in? What am I supposed to like? Who am I? Well, I can tell you that it was rough, not identifying with either because I was too white for some and too Mexican for others. My bicultural identity would at times get the best of me.

However, now I see that as something that’s beyond beautiful, and something that I am truly grateful for. I am proud with a sense of defined purpose. I cheer for our red, white, and blue soccer ambassadors during the World Cup, but I also dawn the El Tri fútbol jersey. Why can’t I support both? Do I sing along to El Rey when it comes on? Only as much as I do when I wail and mosh to “Smells Like Teen Spirit”.

I am proud of my Mexican heritage, my hard-working parents, and my fused upbringing. I wouldn’t be who I am without it. It makes me even more grateful to work at a place like InnovateMR that champions multicultural diversity and empowers our team to share their stories, like I have this opportunity to share with you. We wish everyone a happy and proud Hispanic Heritage month!

Jeremy Carreno, Senior Account Executive, Global Key Accounts, is an industry veteran of 8 years and has held positions in project management, client services, team management, and most recently in client development. He specializes in aligning researchers with digital or traditional market research execution, helping them generate true insights and a solid understanding of the process – be it through automation or a full-service white glove approach.

InnovateMR is a fiercely independent sampling company that delivers Faster Answers™ from business and consumer audiences. As industry pioneers, InnovateMR connects organizations with market research audiences around the world to support informed, data-driven strategies, and identify growth opportunities. InnovateMR has built its reputation on a relentless pursuit of customer delight. Stop working with vendors, and start working with a partner dedicated to your success.