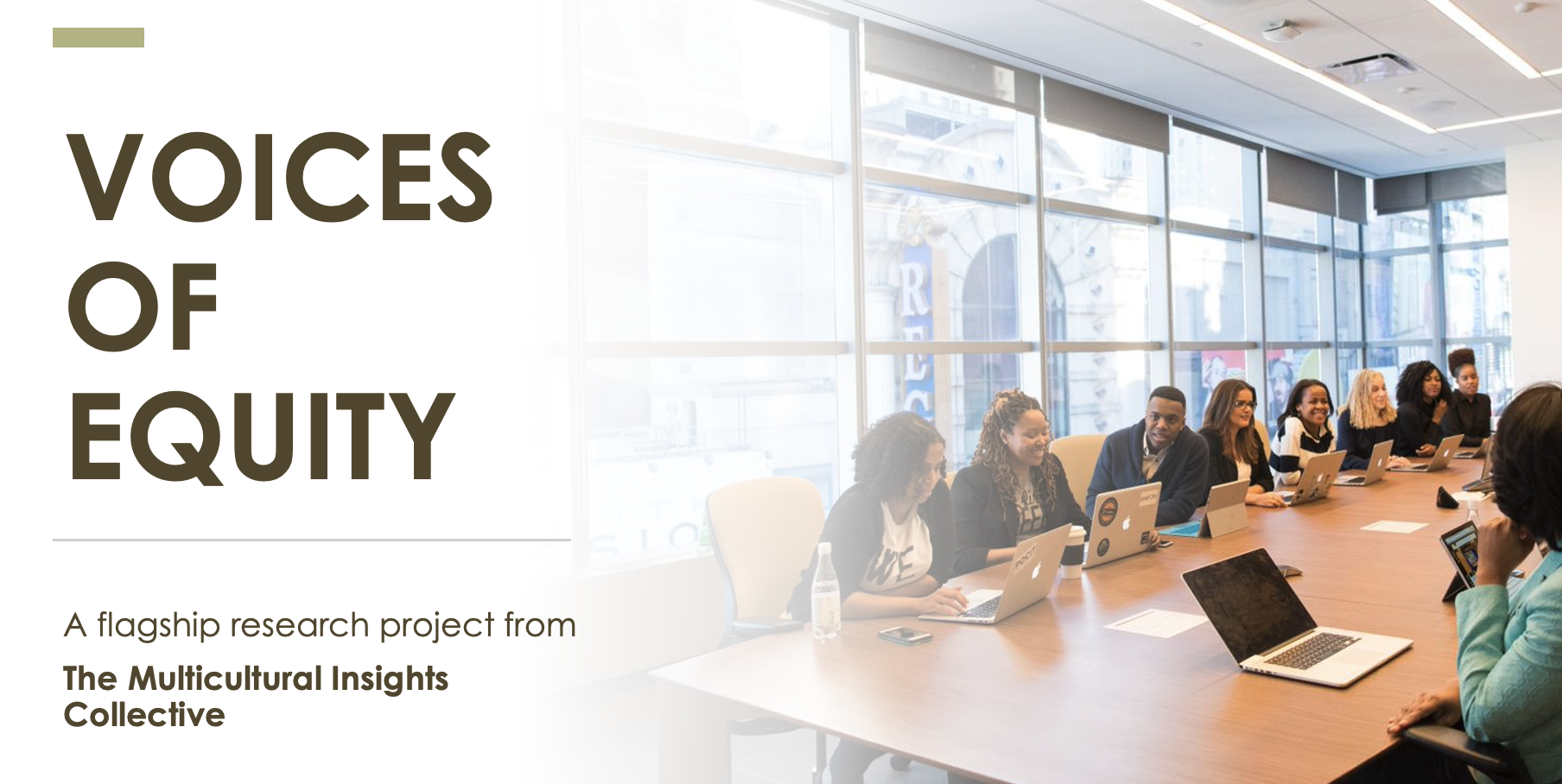 2020 has taught us more than our fair share of lessons that has led to rude awakenings, and one of the biggest is that there is a deep divide in the United States when it comes to racial and social equity. The tragic deaths of George Floyd and Breonna Taylor have put these issues to the forefront of our minds, our conversations, and our actions. The proliferation of the Black Lives Matter movement exploded on social channels, and brands were confronted with the need for an immediate response. But were these the right actions? Is it truly what communities of color or other underrepresented groups wanted?

Brands responded blindly with blanketed statements, but simply disagreeing with injustice was not enough and was often dismissed as virtue signaling. If they didn’t respond immediately, they more often found themselves in communication paralysis and chose to say nothing. Unable to gather true answers or enact meaningful change, this was a huge miss by many corporations; their inactions were interpreted as complicit acts and further alienated them from consumers.

To answer this call, a group of veteran insights professionals are working to fill this gap in the industry, giving brands the confidence to speak and act on issues of race, equality, inclusion, representation, and more. The Multicultural Insights Collective, a diverse, cross-organizational research-based community co-founded by InnovateMR, is focused on breaking down these challenging walls to enact meaningful and insightful change. 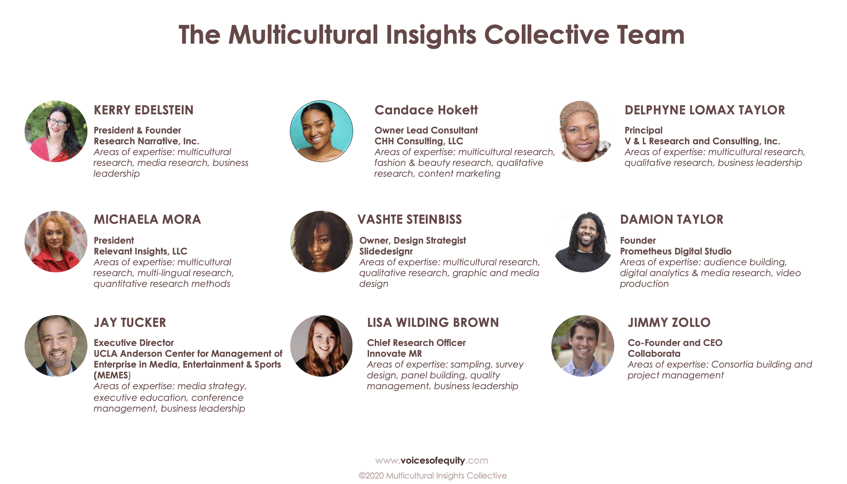 This online quantitative study surveyed 1,080 Americans ages 18-74 in September 2020 and was optimized for both mobile and desktop users. Respondents were asked a self-identification race question as well as Hispanic origin question. To ensure a readable base, minority groups were oversampled, and the final data set weighted for national representation. During the course of the study, five emerging themes came to light.

Even though most Americans believe in and would like to solve the same socio-political issues, coming together for positive change can be nearly impossible. This has never been more prevalent than in the past year, with 2 in 5 Americans severing ties with a close friend or family member due to a controversial topic: 21% cited the presidential election, 18% said the effectiveness of masks, and 18% reported the BLM protests were the cause for separation. 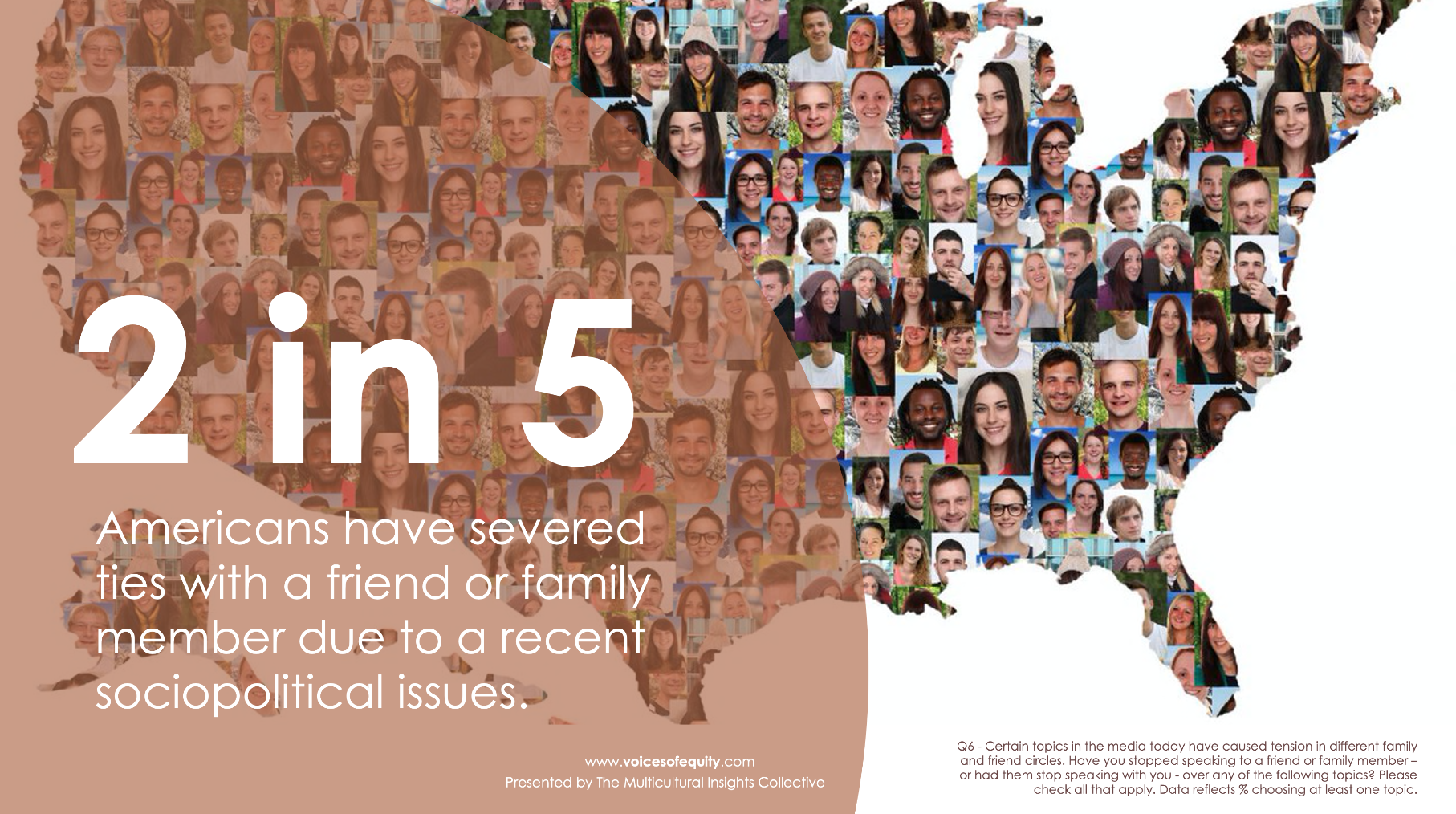 When it comes to ending police brutality, 24% of black Americans said it was the most important social cause out of 20 listed issues. Compared to the rest of the data set, participants ranked this issue as the fourth most important cause. Similarly, black Americans were 2x as likely to say that police brutality had taken an emotional toll on them, and that only 34% believe that their local police officers would protect them, versus 71% of white Americans. Sentiments only got bleaker with a darkening of skin tone. 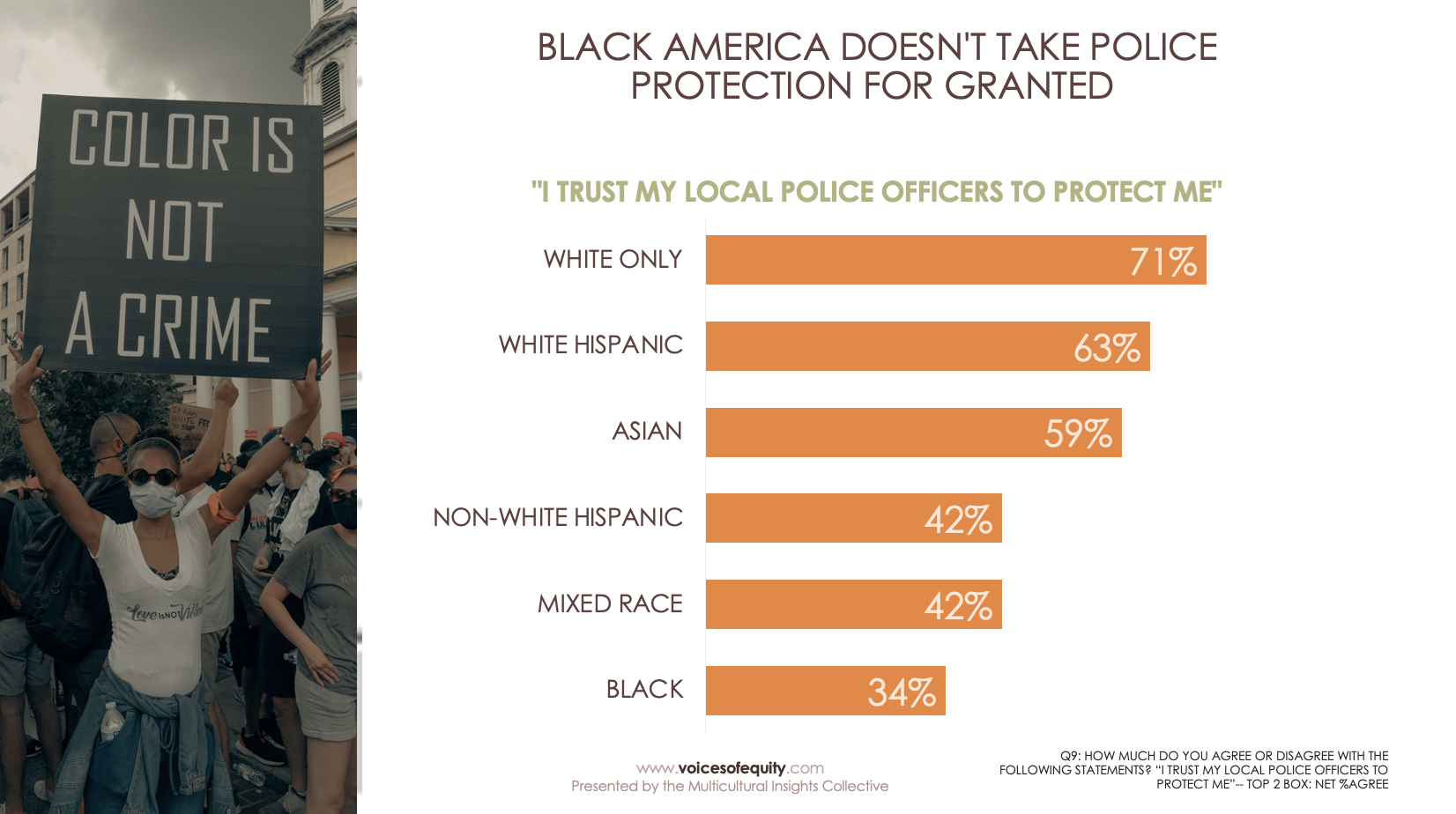 Other minority groups coming from different backgrounds with their own inequality problems were not always the top advocates for the BLM movement. 2 in 5 Asian Americans stated that they were too exhausted from the stress of the pandemic to worry about Black Lives Matter, worrying mostly about racial issues concerning COVID-19 and phrases like “The Chinese Flu.”

So, who are the biggest allies of the BLM movement? Unsurprisingly, Gen Z respondents were 4x as likely to earmark police brutality as their #1 social cause when compared to the rest of the US, with Millennials not far behind, working hard to drive the conversation around racial inequality.

Even though these different issues were all important to Americans, racial backgrounds drove decisive differences as to what was more or less important.

When it comes to hashtagging on social media, this research uncovered three distinctive findings. First, hashtags are often championed by the younger generations with 68% of Gen Z respondents using a current events hashtag such as #BlackLiveMatter, #BlueLivesMatter, #MeToo or #BuildTheWall.

Second, hashtags are often not generationally inclusive, although they are well intentioned, with 82% of the Boomer generation never once using a current events hashtag. 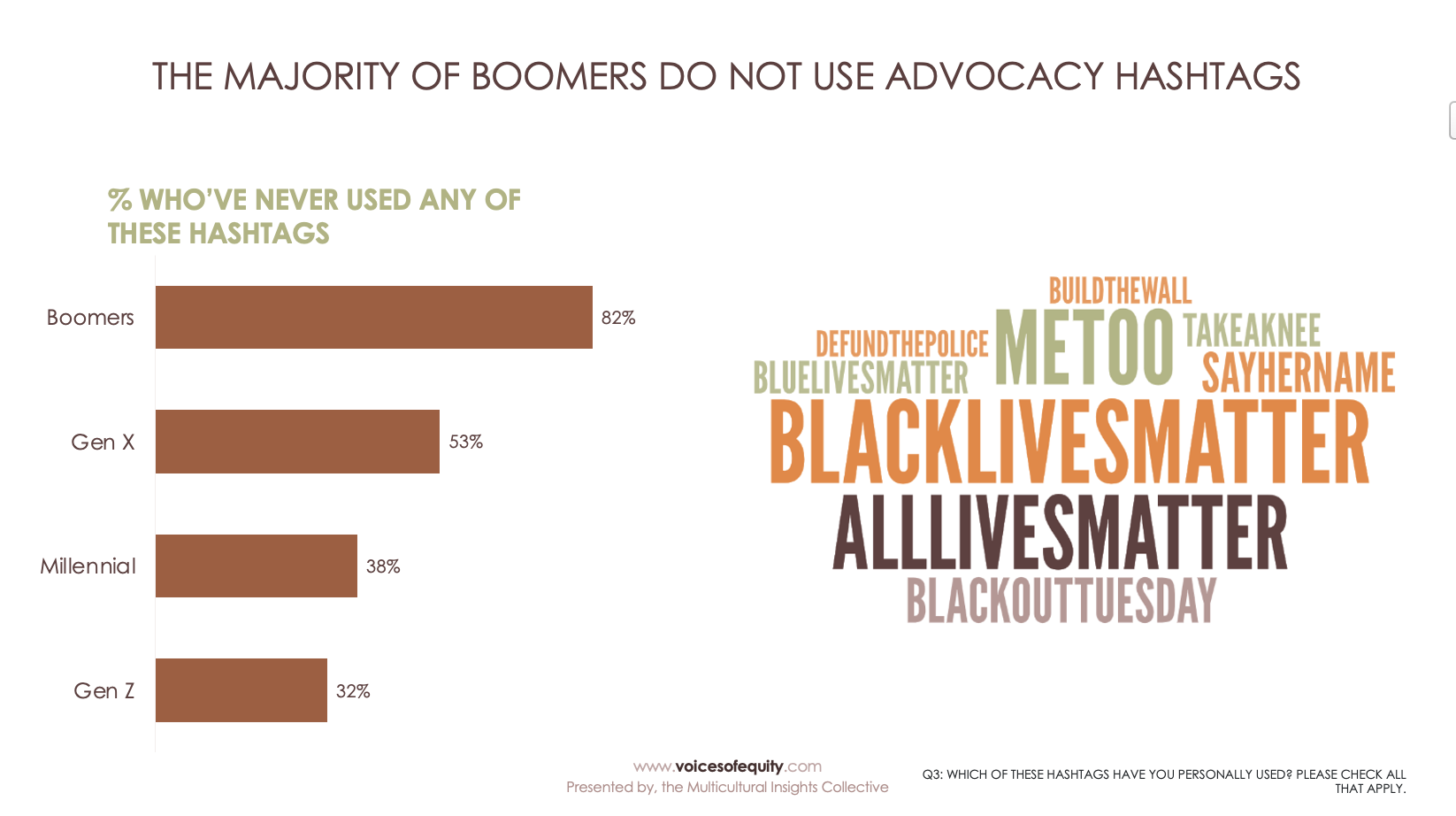 Third, hashtags can be highly divisive and sometimes miss the mark on appealing to groups that advocacy champions are aiming to serve. For example, #BlackLivesMatter has clear messaging with 48% of black respondents supporting and liking the hashtag. However, other hashtags such as #DefundThePolice, saw 21% of black respondents supporting the movement but yet, finding the hashtag misleading or divisive. Is “defund” the right word? Does it convey positive or negative meaning? What about the protective function the police do serve? Words matter when it comes to hashtag virality and movement progression on social media. 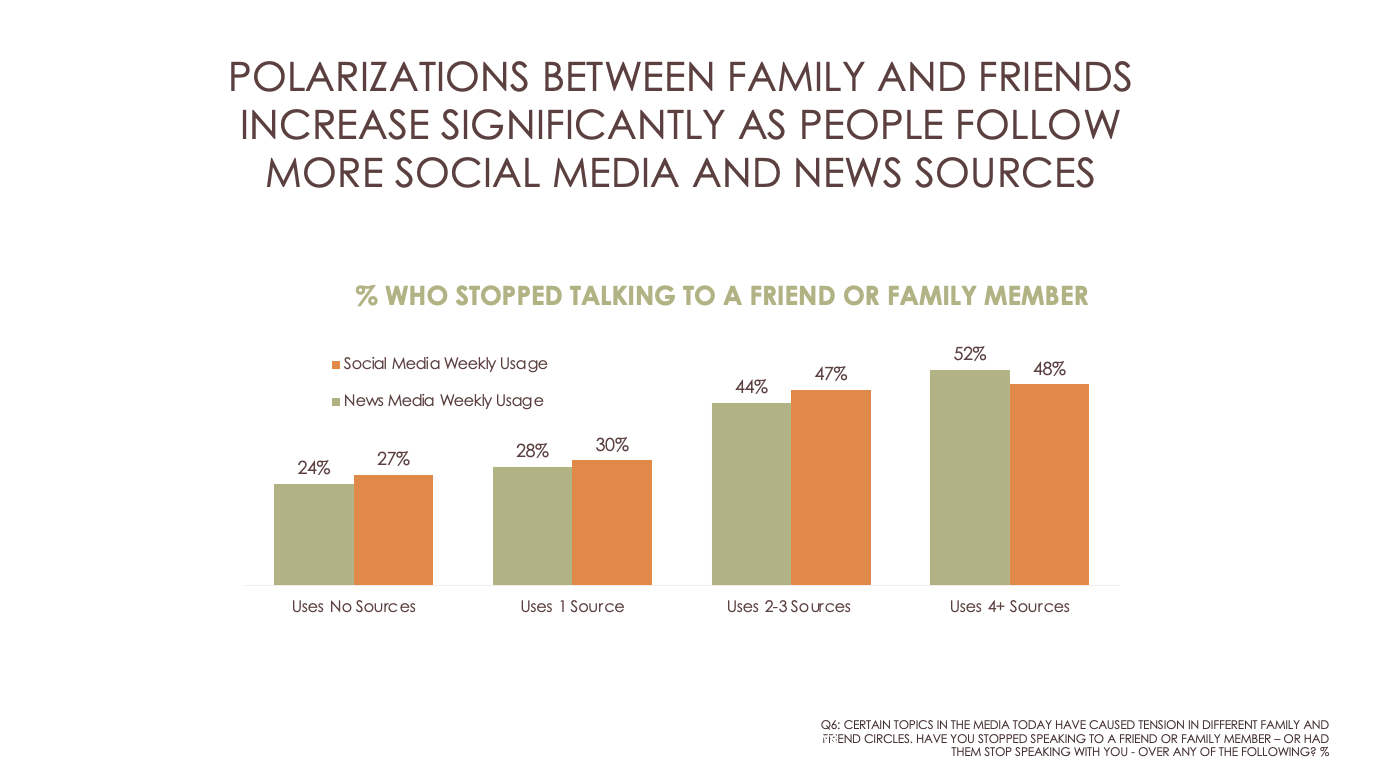 Despite these statistics, only 1% of respondents consumed exclusively liberal media (MSNBC, BuzzFeed, Huffington Post, Washington Post, etc) and only 3% of respondents consumed exclusively conservative media (Breitbart, Fox News, Wall Street Journal, etc). This shows that actually, we are not in as big of a politically-charged news bubble as we might think.

Newer terminology is still developing, meaning that not very many people are using these words or have consensus on the definitions behind them. Terms like “white fragility” and “microaggression” are used by less than 30% of respondents both of white and racial or ethnic minorities. However, more mainstream words such as “equality” or “discrimination” are used by more than 80% of all participants. 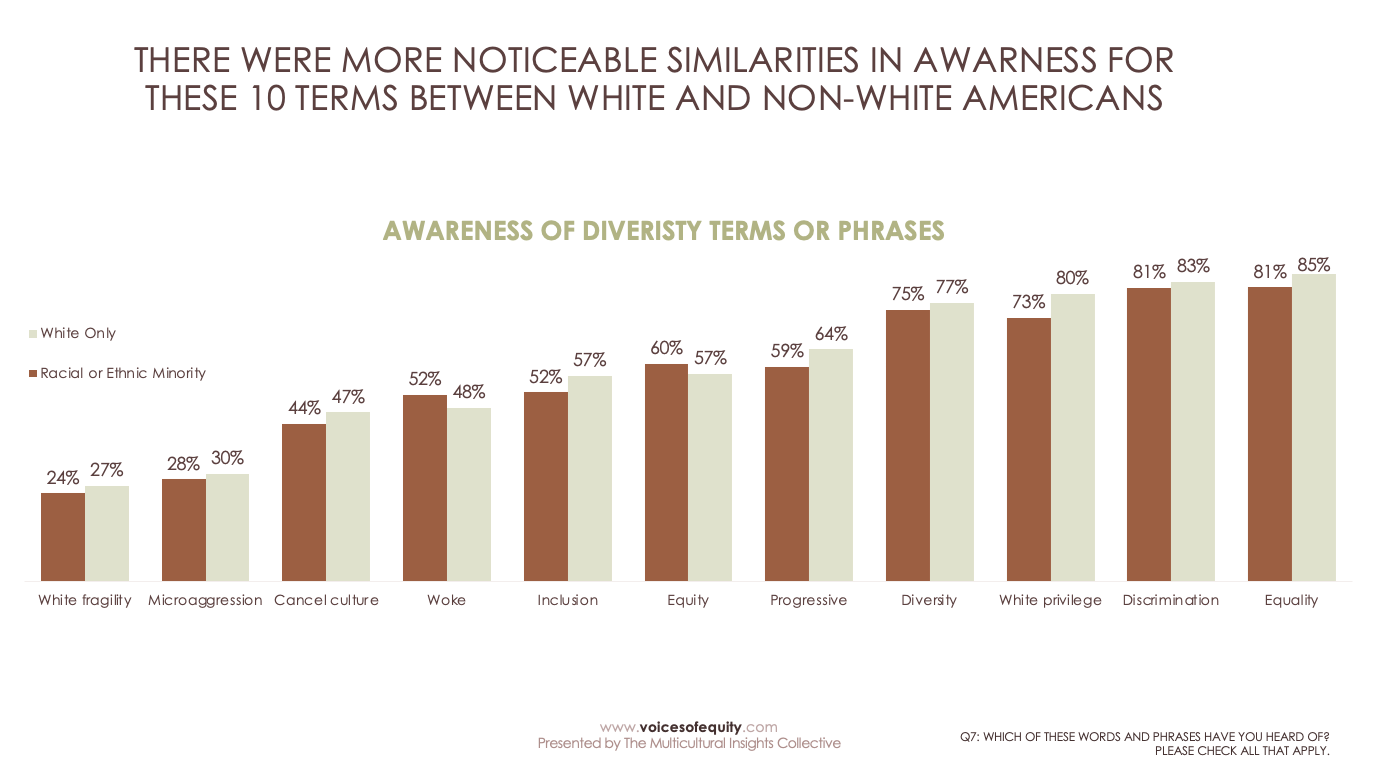 With the word “discrimination” for example, there was consistency around how respondents defined the term: most said that it was the removal of benefits or opportunities from a group of people with perceived difference that they cannot control (sex, age, race, etc). However, with more contemporary terms such as “virtue signaling,” “white fragility,” and “microaggression” only 17%, 26% and 29% of participants, respectively, were able to convey its meaning. 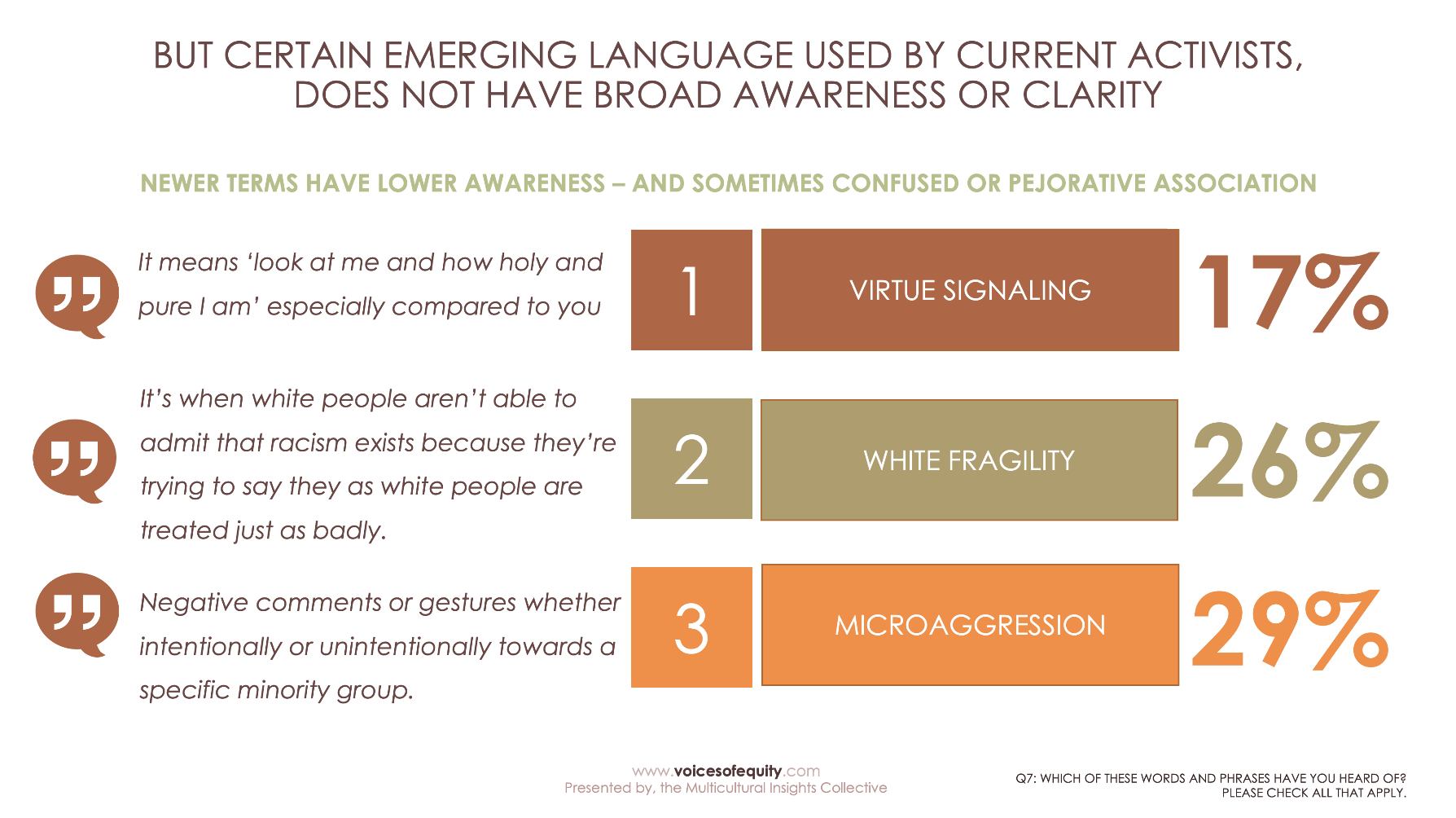 Truly understanding these terms is critical for brands to ascertain how best to communicate their message, show support for social causes, and champion internal change. Using a word wrong or the word in the wrong context can lead to offensive content, regardless of how well intended.

Equity can mean financial ownership. It can also mean fairness or allowing more than one entity to mutually succeed. Together, the word equity holistically conveys that a lack of opportunities related to race, sex, age, religion, or gender has a greater more tangible impact on individuals. If you are unable to get a job due to corporate discrimination, it has a very real and material impact on your finances.

Combining these two definitions shows the interconnection between discrimination and quality of life. Non-white Americans were more likely to have negative experiences in the workplace, with nearly 2x more non-white Americans saying their race played an unfair part in their hiring, firing, company fit, promotion opportunities, or likelihood of getting a raise. 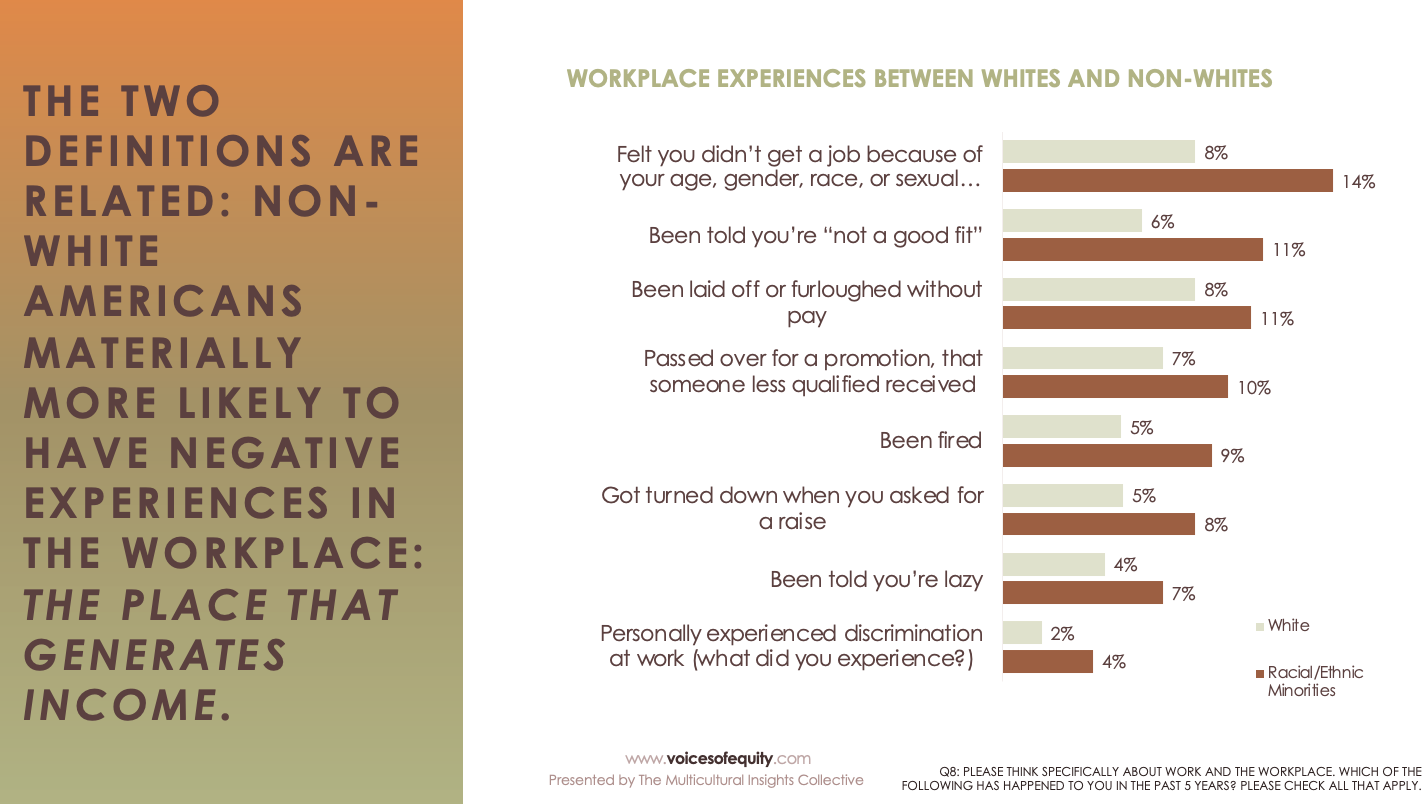 5 Insights That Emerge from This Research

However most importantly, all professionals at every level need to do better at fostering unifying, thoughtful, and inclusive conversations. These types of investments require both resources, commitment, and research, but are necessary to further the socio-political growth of society. Want to learn more about how you can create an equity-conscious environment in your brand messaging or organization? Contact InnovateMR, a proud founding member of the Multicultural Insights Collective and advocate for social and racial equity in insights, to learn more about our initiatives.