Are You An Imposter? 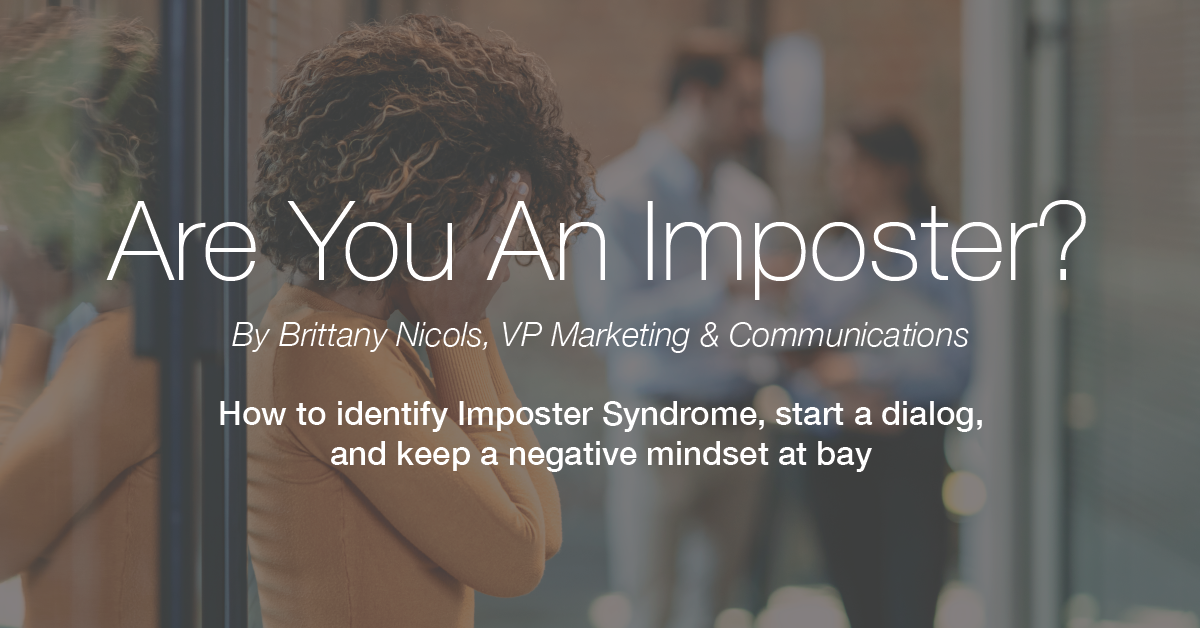 “What am I doing here?” “I am not qualified for this.” “Someone could do this better.” “I’ve just been…lucky.” Sound familiar? Welcome to the club. This meandering internal dialogue has a name: Imposter Syndrome. According to the American Psychological Association, Imposter Syndrome is the unsubstantiated belief that you are under-qualified for your position and individuals suffering from this mental model have a hard time accepting accomplishments, regardless of qualifications.

According to KPMG’s Advancing the Future of Women in Business Summit Report, Imposter Syndrome is one of the least talked about, yet prevalent issues faced by professionals today, but one especially felt by working women. While there are many ways in which it can affect the psyche, it is most often identified as a disparaging internal dialogue, insisting that we are underqualified, unworthy, or unskilled; that our accomplishments are not only unwarranted, but nakedly seen as such by those around us (no matter how much their words or actions may suggest otherwise).

If this sounds at all familiar to you, you are not alone. My name is Brittany Nicols, and I have fallen victim to my own Imposter Syndrome, at various times, throughout my 15-year career in Market Research.

Early on in my career, back in 2007, I was promoted to management for the first time in my still fledgling career. With that promotion came newfound responsibilities for me. I would now be overseeing the hiring, professional development, and even potential termination of others; many of whom were older, more tenured, and – unlike myself – held college degrees.

Yep, just like Abraham Lincoln, Walt Disney, Bill Gates, Steve Jobs, and Mark Zuckerberg, I don’t have a college degree. However, I don’t have billions of dollars in my bank account to free myself from the voices of insecurity and self-doubt wracking my brain. Since starting my career, I’ve always made a habit of being the first through the door and the last to leave. I have studied all the nuances of every role I’ve served, and cross-trained with other departments so I could understand what my colleagues were doing and how I could work more efficiently with them. I am curious, capable, and driven. And yet, even with that first promotion, all those years ago, my sense of self-doubt only continued to intensify.

On client calls, conversation would inevitably turn to Alma Maters. I remember shrinking up, trying to make myself as small as possible in hopes of evading the topic, but each time, without fail, they would ask me. I’d turn bright red, and stammer, “Oh me? No… I didn’t go to college.” More a shameful confession than a statement.

I was never certain if that uncomfortable pang in my gut came from admitting it aloud, or from the judgement I felt in the silences which followed. I only remember their expressions feigned embarrassment and pity to mask what was certainly – simply had to be! – disgust and confusion about why I was there. And even as they offered niceties to change the topic, I knew I was exposed.

At least, that was my perception.

These feelings formed a pattern of self-doubt which would continue. I avoided applying for roles I knew I could potentially thrive in. I never asked for promotions or raises because I was certain that ‘Manager’ was the highest position I could ever achieve. Those diplomas, that I didn’t hold, hung over my head as overwhelming proof that I was forever underqualified for advancement. I should settle, and be thankful, with what I was given and not make waves. Imposter Syndrome is most insidious because it whispers poison into your ears. It is notorious for twisting reality until what we see as self-preservation becomes, in fact, self-sabotage.

It wasn’t until very recently that I was able to put a name to what I felt throughout my early career: Imposter Syndrome. Through research, I found I wasn’t the only one unfamiliar with this term. I felt passionate about giving weight to the feelings of insecurity I had struggled with for years and tapped my company, InnovateMR, for support. We surveyed 1,000 business professionals from our panel across a wide variety of company sizes and industries. Unsurprisingly, 65% of participants expressed unfamiliarity with the term “Imposter Syndrome.” While our research showed that the feelings associated with Imposter Syndrome are prevalent, identifying with a label evaded many. While Imposter Syndrome can affect anyone at different times and with varying degrees of severity, we found that most of those currently affected (53%) were young, high-achieving, female professionals.

This data actually raises more questions than there seem to be current answers. For example, do women, more often, fall victim to Imposter Syndrome due to a stronger need for showing composure in the workplace (lest they be seen as “hysterical” and further scrutinized)? Beyond that, how much of the feelings associated with Imposter Syndrome are seeded due to history, rather than chemistry? With an influx of women entering the workplace during the 1960’s, and disparities in pay somehow still a topic up for debate some 60 years later, it’s no wonder there can be a combative sense of feeling inferior, unwanted, or lacking agency. Factor in other internal conflicts, such as internalized patriarchy, the concept of “faking it ‘til you make it”, or a sordid history of slanderous stereotypes around quid-pro-quo “favors” diminishing and attacking female accomplishment within the workplace, and it is little wonder that Imposter Syndrome can feed, like fuel to a fire, this mindset for so many professional women in today’s workplace.

As a consummate learner, I have been researching various resources on this topic over the last several months. This data is just the tip of the iceberg! As professionals in the industry become more aware of this term and how it is affecting them and their colleagues, we must indoctrinate and socialize more open discussions so that organizations large and small are mindful to the experiences of those suffering from this affliction.

Women are out there right now putting themselves last, telling themselves they bring nothing to the table, wildly unaware that this is a systemic problem that so many of us have or currently face. Data aside and simply leaning on internal conversations, I have had with colleagues and friends, I can confidently say you are not alone if you’ve ever had these thoughts.

It took me my entire early career, 7 years to be exact, to mentally pull myself out of the self-doubt ditch I had built, and realize that going directly into the workforce, and not finishing college, was actually my superpower. I have always had a passion for helping others turn their insecurities into their greatest abilities. I would always tell others to take that leap; without risk there is no reward. I needed to start practicing what I was preaching. I finally had the courage to ask, even demand, more for myself. So I did. I joined a new company in 2015, InnovateMR; a start-up, with only 9 other employees at the time. Talk about being thrown into the deep end! Looking back, it has been the best decision I could have made for myself and I wish I would have been brave enough to take that dive sooner.

Through a combination of working with the right people, and having confidence in myself and my abilities, I finally realized that I brought something special and unique to the table. I had years of on-the-job training that many of my counterparts lacked. I was scrappy and not afraid of a challenge. I was able to pivot and accept change with a positive attitude. I had an insatiable drive and hunger to always learn more. I was willing to go the extra mile and work the longer hours. I had empathy and led by example rather than by fear. All of these things helped to propel my career forward. Every person and every experience are different, so unfortunately, I don’t have all the answers. What I can tell you is what I have learned through my experiences, and what has helped me keep those thoughts of self-doubt at bay:

I leave you with this: “Your mind is a garden, your thoughts are the seeds. You can grow flowers or you can grow weeds.” If you’ve ever had to pull weeds, it is backbreaking work. Let’s all do ourselves a favor and not only be kind to one another, but most importantly be kind to ourselves.

Brittany Nicols is the VP of Marketing & Communications, managing the growth and development of the marketing team. She also lends her deep knowledge of research to sales integration and operations. InnovateMR is a fiercely independent sampling company that delivers Faster Answers™ from business and consumer audiences. As industry pioneers, InnovateMR connects organizations with market research audiences around the world to support informed, data-driven strategies, and identify growth opportunities. InnovateMR has built its reputation on a relentless pursuit of customer delight. Stop working with vendors, and start working with a partner dedicated to your success.